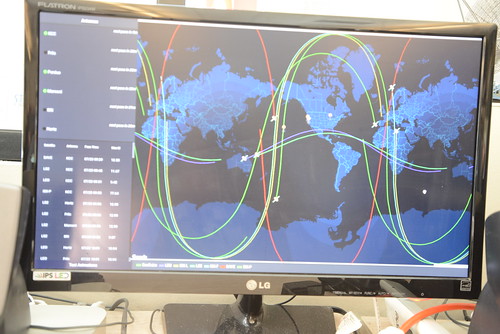 Scientists from the Planetary Society used the PolySat lab as their mission control for the deployment of LightSail 2. Click here for a photo gallery.

From Cal Poly’s PolySat lab, a scientist announces, “We’ve got a sail out!” prompting Bill Nye to let out a “Woot!” and offer a thumb’s up.

Nye – known as “Bill Nye the Science Guy” on television – is CEO of the Planetary Society, which privately funded LightSail 2, a mini satellite designed to be propelled through space with an 18-foot sail. LightSail 2, which is roughly the size of a bread loaf, was prepared at Cal Poly with student assistance and launched in June. The mini satellite contained four triangular-shaped Mylar pieces that could unfurl to form a square.

On Tuesday, the PolySat lab acted as mission control for Planetary Society scientists as the sail was set to be deployed.

As the deployment neared, the PolySat lab grew quiet, the Planetary Society crew monitoring their laptops. In the PolySat lab, someone had drawn a photo of the light sail on a white board, with “Go Light Sail!” written next to it. Nearby stood a life-sized cut-out of Jordi Puig-Suari, the now-retired Cal Poly aerospace engineering professor who co-founded mini-satellites, or CubeSats, which have revolutionized space research.

Meanwhile, a lecture room across the hall offered a live feed of both mission control and Nye, who appeared on a live stream from his vacation spot in Delaware.

“We are advancing space science and exploration,” he said. “We are democratizing space. We are innovating.”

CubeSats mostly float in space, but the next step is propulsion, which would allow them to travel through space with more direction. The LightSail 2’s sail will be propelled by photons from the sun.

While Nye said he learned about light sails through scientist Carl Sagan in the 70s, the concept, he added, is ancient.

“People have discussed this for centuries,” he said.

Privately funded, it cost about $7 million, Nye said, whereas it might have cost $140 million had a space agency funded it.

“It’s one of a couple of places to go if you want to fly a CubeSat,” he said.